Vladimir Putin announced on Wednesday, March 23, that Russia will no longer accept any payment in dollars or euros for gas deliveries within the European Union. A way for the president to respond to the financial sanctions imposed on him, as well as to raise the course of his national currency.

Almost a month after the start of the invasion of Ukraine, Vladimir Putin asked the Russian central bank and his government to establish “within a week” a new exchange rate system to impose payment for Russian gas imports in rubles.

“I have made the decision to implement a set of measures to move to payment in rubles for our gas delivered to hostile countries, and to waive all regulations on currencies that have been compromised,” the Russian president announced during a government meeting. .

Two reasons explain this request: on the one hand, the Russian leader intends to respond to the strong economic sanctions inflicted by many Western countries, which weigh on your country. The West in particular froze some 300 billion dollars of Russian reserves abroad, an initiative described as “theft” by the head of Russian diplomacy, Sergei Lavrov.

On the other hand, imposing the acquisition of rubles on the market to carry out transactions allows to significantly raise the price of the currency, which had suffered a loss of value of almost 30% these last few weeks.

The effects of this announcement were immediate. The march of the currency has strengthened against the euro and the dollar, on the other hand, certain countries such as Germany have denounced a requirement that would constitute “a breach of contract” and do not intend to respond favorably to this offensive.

Faced with this situation, the West still has an arsenal of sanctions with, in particular, the issue of the global oil embargo, already decreed by the United States, which is still on the table and which could “sink the Russian economy”, according to the chief of staff of the Ukrainian President Volodymyr Zelensky.

At the moment, due to the dependency of many European states, Russian hydrocarbons have largely been spared economic sanctions and continue to flow into Europe, with several hundred million euros a day at stake for the Kremlin. Several international summits are expected in the coming days to consider a response to this offensive and decide on possible new sanctions. 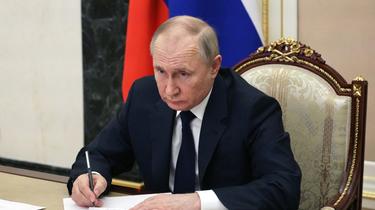 For his part, Vladimir Putin hinted that other Russian exports could be affected by the same measure. The Russian space agency Roscosmos already announced on Wednesday evening its intention to also switch to ruble settlement with its international partners, just after President Putin’s announcement.

However, some Russian companies like the giant gazprom could suffer from this new measure, finding themselves short of foreign currency to meet their debts in the future. Countries declared “hostile” by Russia are estimated to account for more than 70% of Russian energy exports.