Unlike Europe, which is highly dependent on hydrocarbons imported from Russia, the United States has decided to curb imports of Russian oil. On the other hand, they were careful not to do it for the enriched uranium that fuels their nuclear power plants. In fact, Russia controls 35% of the world’s supply of enriched uranium. The threat of an export ban has caused the price to shoot up 30% since the start of the conflict. At one year, the rise is close to 100%, breaking an 11-year record at the beginning of March, surpassing the pound of enriched uranium (U3O8) 60 dollars in the futures market. 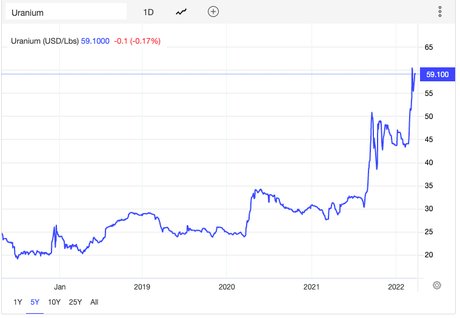 The national interest threatened in the United States

Paradoxically, the embargo threat is twofold. On the one hand, in the United States, Republican Senator John Barrasso of Wyoming introduced a bill last week to ban Russian imports of uranium, justified on the grounds that the proceeds finance the war against Ukraine. The senator recalls in a press release that “imports from Russia and its allies Kazakhstan and Uzbekistan account for almost half of the uranium (more accurately, 46% of your needs in 2020, according to the US Energy Information Administration) energy from nuclear power plants in the United States. This high level of dependence on foreign uranium threatened our national interest and national security before Russia invaded Ukraine, now it is simply unacceptable.”. He asks to reactivate local production, especially since Wyoming, the state where he is elected, exploits uranium. In 2018, mine production was 635,000 pounds (294.3 tons) of you3OR8.

Because even if a trade agreement limited Russian purchases for the needs of atomic power plants in the United States, it would not be easy to quickly replace the yellow cake Russian. At this point, the United States finds itself somewhat in the position of Germany and its dependence on Russian gas. In fact, the world supply of fuel used in nuclear power plants comes from a few countries.

Kazakhstan, the main producer of ore

But for its part, Moscow is also threatening to stop uranium sales to the United States in response to sanctions imposed by the United States and Europe. Earlier this week, the Deputy Prime Minister, Alexander Novak, questioned on this point, stated: “This issue is also on the agenda, it is being studied”.

The main producers of uranium ore are Kazakhstan, whose extractions alone equal those of the other three main producers: Canada, Australia and Namibia, according to the report prepared jointly by the Nuclear Energy Agency and the International Nuclear Energy Agency: “Uranium 2020, resources, production and demand“. Russia is far behind with 7%, except that it owns some of Kazakhstan’s production through a joint venture between local producer Kazatomprom and Russian nuclear giant Rosatom. Importantly, Russia owns almost half of the the world’s processing capacity – a complex process – and uranium enrichment, which in several stages transforms the heavy metal into fuel to power nuclear reactors.

If nuclear power plants have enough uranium reserves for several months, their operators must plan the supply several years in advance. But like other raw materials, securing this ore supply is crucial. The stakes are far from insignificant, with nuclear power providing about 20% of electricity production in the United States and 10% globally, according to the World Nuclear Association.

Besides Russia, the other countries that enrich uranium are France and Canada, as well as China. But the latter not only supplies itself from its own reactors and, therefore, is not an exporter.

The return to favor of nuclear energy

Since the disaster in Japan at the Fukushima power plant in 2011, due to a tsunami, nuclear energy has been rejected by public opinion and questioned by NGOs such as Greenpeace and environmentalist political parties, which in particular had led Germany and its chancellor. Angela Merkel to definitely rule out this option to supply energy to the country. But the need to rapidly reduce CO2 emissions to combat global warming and today, as the conflict in Ukraine shows, to end dependence on Russian gas, oil and coal, have challenged atomic energy to the forefront. . last month the French President Emmanuel Macron spoke “a nuclear renaissance” for France, which would entail the construction of 14 new EPR2 reactors, eight of which are optional in the long term, as well as the maintenance of the current fleet for as long as possible, that is, at least sixty years after the construction of the existing plants.