Tuesday March 29. It is noon and police controls multiply at the entrance to the Mohammed V stadium in Casablanca, which is preparing to host the most important match in recent years. After the draw (1-1) against the DRC in the first leg, Morocco has its destiny in its hands and can dream of a new qualification for the World Cup. Tension is at its peak around a venue decorated in the colors of the country, red and green. More than seven hours before the start of the game, the fans raise their voices and begin to queue to enter the stadium. “I can’t wait to get back to this stadium, I missed it. I am impatient” Karim confesses that he has been waiting twenty minutes with his flag. Because with the covid, the stadiums in Morocco sounded hollow and the FRMF (Moroccan Football Federation) had just made the decision to authorize the public.

At 3:00 p.m., the police finally decide to open the metal gates and the first fans enter the stadium. A stadium without number in the seats and that pushes the adage: “the first to arrive, the first to be served”. To be sure of a good spot, some don’t hesitate to spend six to seven hours in the stadium before kick-off and take care of it as best they can. Anas, who came with his family, decided to play cards in the blue stands of the stadium while the others try to sing so as not to get cold. Very quickly the stadium begins to rumble and the first music is sent to the sound system to start off slow but sure to wake everyone up.

But to wake everyone up, they just had to wait to see the players from the Democratic Republic of the Congo. Arriving on the pitch for the famous pre-match recognition, Cédric Bakambu’s teammates are whistled copiously. Bottles are thrown in the direction of the players as if to show that they are not welcome in this stadium. The atmosphere changes completely a few seconds later, when it is the turn of the Moroccan players to step onto the pitch and allow themselves a small lap of honor to greet everyone.

The entry of the DRC players under the whistles of the Moroccan public. (watch your ears). #MARRDC pic.twitter.com/AB2cfBHhSl

Then to the warm-up. Moment when Gantoise striker Tarik Tissoudali decides to show surgical precision during exercises in front of goal and thus ignite a stadium that only asks to see a good game, but the first information reaches the ears of the public, the Moroccan Composition. A true darling of the Moroccan people, Sofiane Boufal announces herself on the bench. Bad news for lovers of technical gestures. The fans then begin to chant his name for long minutes and exclaim each one of his touches on the ball during a juggling session of which he has the secret.

And if some doubted its popularity, it only remains to wait a few moments when the two compositions are announced. Unsurprisingly, the Angers striker is applauded much more than the others, even if the other star in the crowd is obviously called Achraf Hakimi. On the DRC side, an umpteenth anger falls on the players when his name is announced, except for one who is praised by the entire stadium: Ben Malango. The 28-year-old striker has a following in his pocket for the simple reason that he played for a club at Raja Casablanca and therefore plays in front of an audience he knows particularly well. Certainly moved, former TP Mazembe took the opportunity to applaud the latter who, for their part, were busy welcoming the hundreds of Congolese supporters present.

19:30 local time, the kick-off is given by the Moroccans and the atmosphere rises to a higher level. Despite a rather cautious composition by Vahid Halilhodzic – the Moroccan coach is booed throughout the stadium when his name is announced – the show is on and Casablanca’s son Azzedine Ounahi leads the way with a sensational shot that turns everything upside down. a stadium. Fireworks are even launched after this goal. Enough to make players want to show off even more stuff on the field. And that’s what was going to happen. Choked, booed, disturbed, the Leopards conceded another three goals in this match. Only Malango, spoiled by the stadium, saved the honor of a stratospheric volley that surprised the fans, quite busy buying some cakes from street vendors to last until the end of the evening.

The crazy end of the night.

In its stadium, before an audience in fusion, Morocco makes a good figure and logically validates its ticket for the World Cup. The enclosure can rejoice, the Atlas Lions will be well in Qatar next November to the world cup 2022. At the final whistle, some cry, others hug without knowing each other. But the desire to share moments of joy together is too strong. This victory does a lot of good for many people who have been deprived for a long time of this kind of emotion. Even more so with Covid. Vahid Halilhodzic, for his part, after having knelt down, no doubt relieved by this success, received a call from the King of Morocco Mohammed VI. The players, in the center of the field, sing and dance and then take the opportunity to thank the public behind them over and over again.

At the exit of the stadium, vendors already offer flags, shirts, caps and all kinds of unimaginable accessories. A few meters further on, behind the numerous police trucks, the first smoke bombs appear, the first horns and also the first flags. “This victory is really a relief. These people needed it. We are going to go to the World Cup also in an Arab country”enthuses Foued, a fan who came from Belgium for the event. The songs multiply and the cars no longer move along the road. Some then take the opportunity to climb on the roof or even the hood. Smiles, tears, joy and above all party. A party that lasted until the end of the night while the players, who first celebrated in their hotel, continued the celebrations in an elegant restaurant in Casablanca, by the sea. 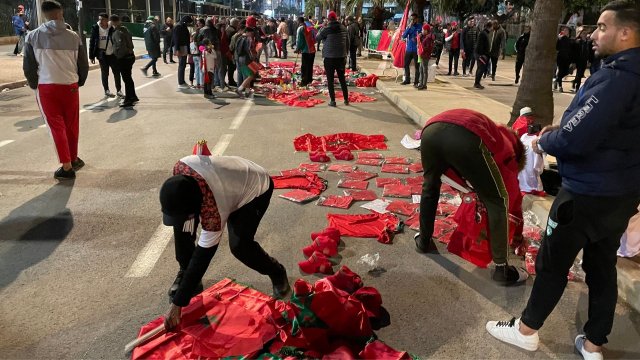 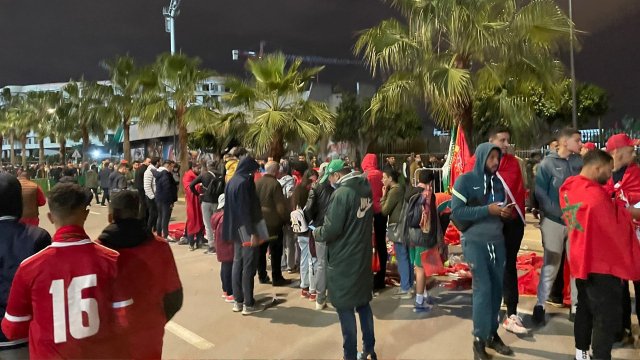