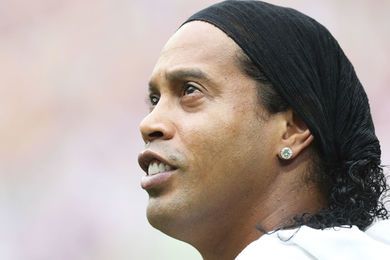 Ronaldinho still believes in the MNM.

Paris Saint-Germain existed before Qatar. He even welcomed one of the greatest coaches in football history. Before shining at FC Barcelona, ​​​​Ronaldinho left his mark in the French capital.

And he, better than anyone, knows the difficulty of imposing himself in this very special context. Passing through Paris, the former attacking midfielder tried to explain the recent performances of the attacking stars.

Starting with Lionel Messi. According to R10, the Argentine striker has not yet fully adapted to life in Paris. Those of us who have played football know what happens in football. You have to give time, things will come naturally. When I arrived in Paris, it was difficult. Changing his way of playing… Messi stayed in Barcelona for 20 years, this is the first time he has changed football. It’s normal, it takes time to adjust. said the South American for RMC.

Ronaldinho especially mentioned the whistles against his former teammate during the reception against Bordeaux (3-0), on March 13. As expected, the former glory of the Parc des Princes did not appreciate the treatment given to the Albiceleste. No. I don’t understand (the whistles). If you whistle Messi, there’s nothing left huh (laughs)! If you whistle for the best in the world, who are you going to applaud? I do not understand continued the Ballon d’Or 2005 in another interview granted to the newspaper Le Parisien.

The 2002 world champion also spoke about Neymar. Aware of the difficulties of his young compatriot, the 42-year-old maintains the hope of returning to the best level, the one for which he was hired for 222 million euros in 2017. I hope that next season he doesn’t get injured and the rest is normal. Every year he wins something, in the national team or at PSG. well not the champions league yet Ronnie argued.

But I hope that with the Russian adaptation of Messi, the three of them (with Mbappé, editor’s note) can write a great story. I think he already has a very strong history in football, right? He is a player who has done many things. He is our main idol in Brazil. I hope I win the World Cup, a Ballon d’Or. I hope I win everything to go one step further added the former AC Milan player.

Mbappé can stay according to Ronaldinho

Regarding Kylian Mbappé, Ronaldinho believes that he can still stay in Paris for a while. I adore her. He is great. He is a player that makes you want to watch and can do great things in football. The future of him? It is he who decides, that is clear. With the PSG players he can stay. He has everything to do well here. But he can play anywhere with his technique. I hope he makes the right decisions. Ronaldinho argued. Response(s) in the coming months.

What do you think of Ronaldinho’s comments? Do not hesitate to react and comment in the area. add a comment …