The United States Environmental Protection Agency (EPA) has authorized the release of more than 2 billion genetically modified mosquitoes in the states of California Y Floridawith the aim of combating diseases such as dengue and the Zika virus.

The pilot project is the product of the British biotech company Oxitec, which specializes in biological pest control. The project is an extension of a successful pilot carried out in thearchipelago of the keys in 2021.

Oxitec plans to release 2.4 billion Aedes aegypti mosquitoes that do not bitegenetically modified to produce only viable male offspring. When the males reproduce, they will pass on the self-limiting gene to the next generation.. In this way, the population of Aedes aegypti will be overloaded with males, causing a decrease in the population.

The Aedes aegypti mosquito originated in Africa, but has since spread to tropical and subtropical regions around the world.. It was first detected in California in 2013, before embarking on a range expansion to USA that has seen the species spread to more than 25 states.

England: thousands of insects appear on the beaches 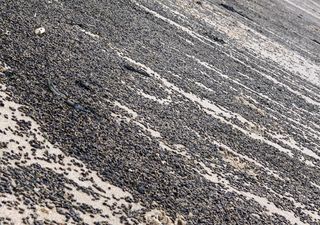 Aedes aegypti is known to spread a number of deadly diseases, including dengue fever, yellow fever, Zika virus, and Chikungunya.. The species feeds on a variety of birds and mammals, with a preference for humans.

However, as with all mosquitoes, only the females feed on blood, using it to mature their eggs. males are harmless and do not spread disease, preferring to feed on fruit instead.

“Given the growing health threat posed by this mosquito in the United States, we are working to make this technology available and accessible,” said Gray Frandsen, CEO of Oxitec. “These pilot programs, in which we can demonstrate the effectiveness of the technology in different climatic contextswill play an important role in this regard.

Genetically modifying male mosquitoes to prevent them from producing female offspring is an effective way to reduce mosquito populations and it is a more environmentally friendly solution than the use of pesticides. Pyrethroids, a group of pesticides commonly used to control mosquitoes, are toxic to insects such as bees and dragonflies, as well as aquatic life.

Although the EPA concluded that the project is harmless to humans and the environment, opponents express concern about unintended consequencesparticularly with regard to the possible interaction of mosquitoes with the antibiotic tetracycline.

This antibiotic can be found in farm wastewater and is known to reverse genetic changes in mosquitoes, allowing the production of female offspring.

Therefore, the EPA has stipulated that mosquitoes cannot be released within 500 meters of sewage treatment facilities, livestock areas, or fruit farms.. For the project to move forward, it is now up to state regulators in Florida and California to grant permits to Oxitec.