Virtual reality allows studios from Korea, the US, China and Europe to work together on the same project, playing with distances and time differences. Explanation with the example of the Seven concept, which prefigures the future Ionic 7 model that is expected to hit our roads next year. 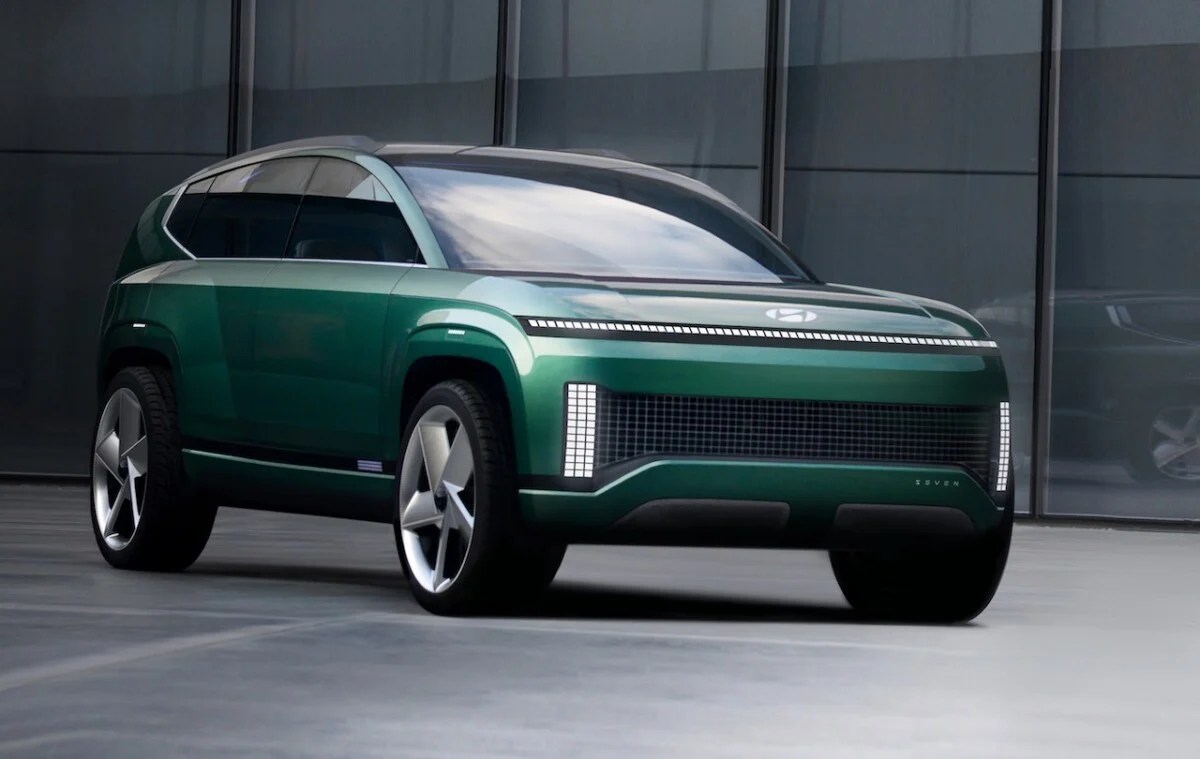 Not everyone has the right to visit a manufacturer’s design studio. But instead of seeing concept cars, clay models of future models, or walls of drawings, at Hyundai Europe near Frankfurt, we were treated to an actual tour of a…virtual world. A kind of metaverse in design mode, as it takes on a new dimension with the Korean manufacturer.

“The Dedesign has been Hyundai’s number one buying criteria for several years.” explains Thomas Bürkle, designer in charge of the European study. This ex-BMW has been here since 2005, heading up a studio that has grown from 10 to 70 people, signing stock models like the i10, i30, Tucson, Santa Fe, sporty N-labeled models, as well as about a dozen showcars.

Big Citroën SM fan, the German is far from being digital native but he appreciates the possibilities offered by the new technologies that he presents to us together with Simon Loasby (vice president at the head of Hyundai Styling), still 10,000 km from Germany, in Korea.

A closeness despite the distance used in their daily work, as if literally side by side discussing the details of a bumper or a dashboard. “Designers cheat a lot” laughs T. Bürkle. And it is precisely to adhere to industrial realities that development models must be extremely precise, without forgetting, however, to be as beautiful as possible.

Until recently, design studio techniques went through the stages of classic hand sketches, then small-scale mock-ups to visualize the various projects in three dimensions, followed for the lucky ones by 1-scale mock-ups. A long haul and expensive for heavy work (2.5 tons) and fragile models to be taken to the different studies of the brand to know the opinions of the different teams and, a crucial step, the validation of the patterns. 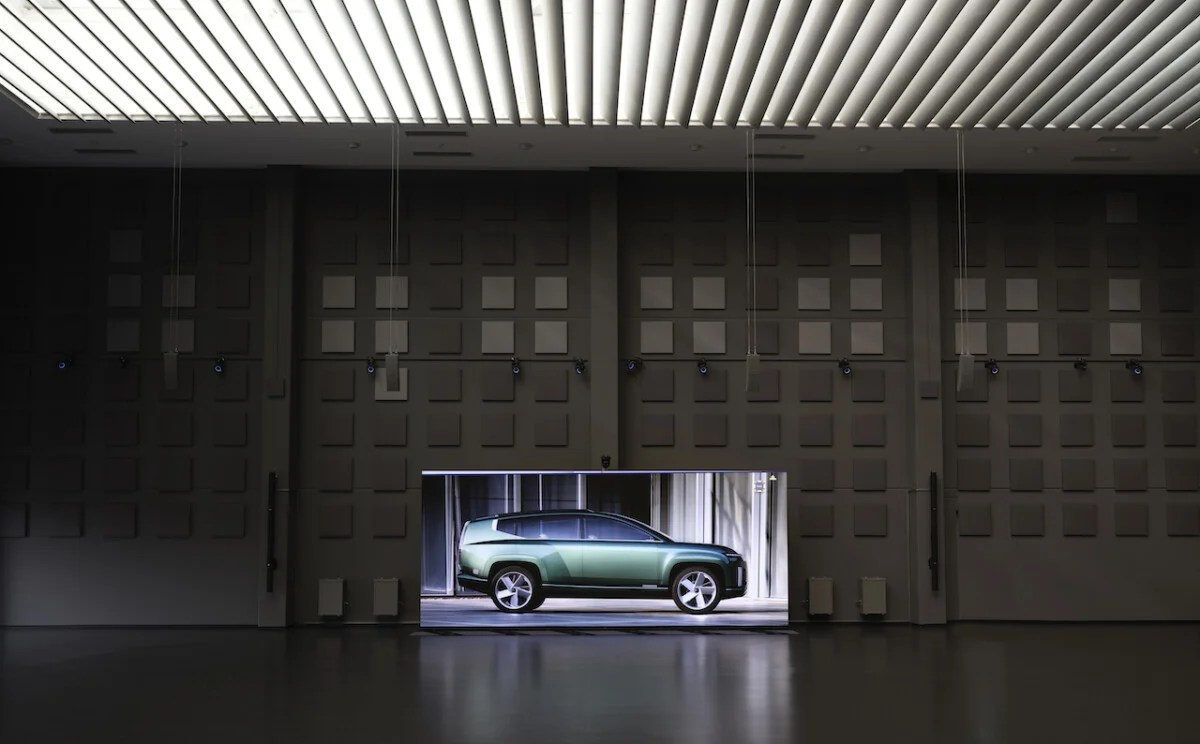 The “clay model” is then scanned to start working on the digital data for industrialization. But that was before the arrival of the 3D visualization studios that have equipped the brand since 2015. This has allowed the design process to become 80% digital. This is a good thing with the advent of the pandemic, a period during which the Seven concept was developed in very close collaboration between Germany and Korea.

“It’s not aboutWhat so manyshorten development time what of find design maturity beforethinking about the interior at an earlier stage”, explains T. Bürkle. Arguments are also better coordination of work, increased creativity, reduced costs (-15%), less waste of materials and a CO footprint.two reduced with less travel, although it is a somewhat more anecdotal argument on the scale of a car manufacturer whose group produced more than 6 million cars in 2021.

We entered a large 20 x 22 m room, enabled for this purpose since 2017, with an investment of 1.5 million euros. A massive 6.5m wide wall of 8K LEDs allows for a first viewing of the model, before being outfitted for 3D viewing.

Forty-eight Optitrack cameras are distributed throughout the studio to ensure the positioning of each participant, with an ultra-precise active tracking system. 10 people can simultaneously stand around a car projected in front of them, equipped with an HP Reverb 2 VR headset and an HP Nvidia 2080 on-board computer in a backpack that forms an incredible harness.

Once equipped, we go into a virtual world in which it takes a little getting used to before feeling comfortable. The Seven concept is there, in front of us, in real size and walking around the model takes time to adjust. The other journalists are visualized through avatars, as is Simon Loasby, who gives us a tour of the owner.

At 2,200 pixels wide per eye, definition remains relatively pixelated, while minor jerks sometimes appear in the image when you turn your head. An impressive rendering anyway, which gets better as you zoom in. There, the painting of the virtual concept reveals all its subtleties, and every detail is refined.

Different different environments can be projected to put the car in moods to choose from. For lack of even more realistic sensations? Hyundai teams are working on developing gloves for tactile feel.

The photos of the brand bosses in this outfit in their dark suits make them look like strange insects, but beware, it is in this outfit that crucial decisions are now being made, in this kind of metaverse of design. Simon Loasby always carries around a complete kit that allows you to immerse yourself in it, which he calls his James Bond kit: an anonymous backpack that carries his computer and helmet, and allows him to do a design review at an airport Starbucks!

For the development of the interior, the designers use a different system that employs mixed reality technology. Vario XR-3 helmets are equipped with cameras to visualize the environment around the car (simply materialized by the seats) and, for example, to be able to see the people around or insert different environments. The Vive Pro controllers allow you to act on different elements of the interior, such as opening a storage or a door, for example.

Again, the image is pixelated, but let’s not forget that it is a work tool focused on materials, and the speed of its change in the system to test different solutions. Here, it’s not data in the form of polygons like in the games, but directly NURBS (data ready to build directly) used by the Autodesk VRED software.

Enough to move as fast as possible in translating the Concept Seven into a production car is close, as the resulting Ionic 7 electric SUV is expected to be on our roads by mid-2023. Based on the 100% electric platform of the Korean group called e-GMP, it is a large SUV (and equipped with antibacterial materials) very habitable, with a giant wheelbase of 3.20 m.

It will have an assertive design, since the Ionic models tend to stay close to the concepts that herald them, even if the latter are nonetheless very… conceptual. Meanwhile, the really tough concept car unveiled at the Los Angeles show last year is still in the US. We haven’t seen it in real life, but we already know it well in virtual mode, like many of the over 600 brand designers worldwide.

To follow us, we invite you to download our app for Android and iOS. You can read our articles, archives and watch our latest YouTube videos.